The game of darts, the game 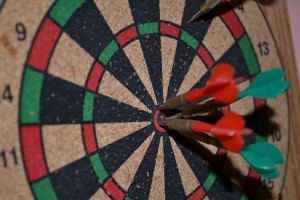 where you position yourself several feet from the dartboard and take aim by throwing that little pointy object to try and hit the middle part of the board called the target. That little pointy object almost resembles a tiny missile. Yes, this game is quite fun to play. And, I am also hoping that you find this game fun to play as well. For this post I am going to be going over mostly everything there is to know about the game of darts.

The game of darts has its origins coming from a cross-section of a tree. The rings that represent the years to its lifespan were used as targets. The game became popular with sailors who played the game infrequently where they used a section off an old mast as a target.

The dartboard’s original name was called the “butt” where it stems from the French word but, meaning “target”. There are Yorkshire and Manchester Log End made-boards that differ from the standard board in that they have no treble, only double and bulls-eye. The Manchester board is of a smaller diameter.

It has been speculated that the game originated among soldiers where they’re throwing short arrows at the bottom of trunks of trees. Once the wood has dried, there would be cracks that would develop which creates “sections”. Soon enough, the blueprints of the modern-day dartboard would emerge and many woodworkers would manufacture dart boards for the local pubs and saloons.

Those pointy objects that are thrown to hit the target of the dartboard were made of crossbow bolts or arrows. The first created darts were made from wood which was wrapped with a strip of lead for weight and fitted with flights made from split turkey feathers. These darts were mainly imported from France and became known as French darts.

The modern-day darts have these four parts:

The barrels come in different weights. They are usually constructed from silver nickel, brass, or a tungsten alloy. Brass is cheap to make. However, light and therefore brass barrels tend to be very bulky.

Shafts are manufactured in various lengths and some are designed to be cut to length.  The shafts are generally made from nylon polymers, plastics, or metals such as titanium and aluminum which can be rigid or flexible.

The points which are made of steel come in two common lengths: 32mm and 41mm. These points are sometimes coated to improve grip. Others are designed to retract slightly on impact to lessen the chance of bouncing out.

The primary purpose of the flight is to produce drag that prevents the rear of the dart overtaking the point. It also has an effect on stability where it reduces wobbling. Modern flights are generally made from plastic, nylon, or foil and are available in a range of shapes and sizes.

Choosing a barrel, shaft, and flight dart will depend on the individual player’s throwing style. For competitive purposes a dart cannot weigh more than 50 grams where the shaft and flight cannot exceed a total length of 300 millimeters.

The dartboard that hangs on the wall is the one that we see in pool halls or game rooms that we are accustomed to seeing these days. The top-quality dartboards are made of sisal fibres which are less expensive boards that are sometimes made of coiled paper or cork.

A typical regulation board is measured at 17.75 inches or 451 millimeters in diameter that is divided into 20 radial sections. Each section is separated with a thin band of sheet metal or metal wire. The highest quality dartboards have the thinnest wire where the darts have less of a chance of hitting a wire and bouncing out of the board. Boards of lesser quality often have the numbers printed directly on the board.

I provided an insight to the game of darts, and I hope to have inspired you with this post. The game is quite a popular game, and, once again, I hope that you find this game enjoyable to play. If you have any thoughts, comments, feedback, etc. please add them to the comments section and I’ll get back to you as quickly as possible.

To your darts enjoyment,