Hi there! In an earlier post called, The Art of Racking, I showed a demonstration and a 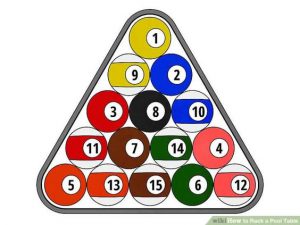 video to properly show how the rack is being set up. In this post, I would like to say that I have used a set up rack that is very exact to the one you see on the right.

I found this on Pinterest and thought that I’d share this image with you. I forgot to ask what kind of set up do you use in that previous post.

Since there are different strokes for different folks, I have to ask, what kind of set up do you use? I know that there are some set ups that alternate between solid and stripes when forming the outer layer once the triangle rack is removed and ready to break. Like, one corner of the rack would be solid #2 ball, the next color after that would be a stripe 16 ball, the next would be a solid 7 ball, etc.

This would continue until the triangle is formed. The #8 ball would be in the middle as you see in the picture where the remaining balls would be inside the triangle as well just below the 8 ball.

So, what kind of rack style do you use? I would like to know in the comments box below. Thanks for stopping by. Cheers!