Are you looking to play golf by playing with more than just the traditional white ball? How about some multi-colored 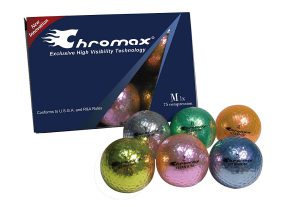 ones? Well, I have some good news for you, I have a set of multi-colored golf balls that can suit you when you’re playing the game of golf. What I’m about to introduce to you is called, the M1x Highly-Visible 75-Compression Golf Balls by Chromax. Not only are these balls colorful, but they have a distinct shine to them to observe the landing position and flight path of each ball.

Let’s say that you’re playing a game of golf and your color is green. You hit the ball about the length of a football field. Your opponent hits his ball and it lands somewhere in the same region as where your ball landed. You both go to where the balls land and instead of playing the guessing game of which balls belong to what players, both of you  would go by the color code: your picked (assigned) colors. This would make the game of golf flow much faster without so much of a confusion or slowdown.

Here is what is described and what you can expect from this set of colored and shiny golf balls:

Chromax’s patented inter-illumination between a reflective inner layer and a translucent outer layer, makes the golf ball easier to see. This higher visibility makes it great for Seniors, Beginners, and those with eyesight issues. Looks aren’t the only thing they have going for them. The 1.57″ diameter core, the industry’s largest is made of a poly-butadiene rubber compound and titanium powder blend. This blend is molded under high temperatures and extreme pressure to create a core with superior durability, elasticity and a high coefficient of restitution.

Featuring bright metallic finishes, Chromax M1 75 Compression Balls have introduced a unique style of ball to the game of golf that is easy to see on the ground and in the air. With their reflective finishes in multiple color choices, the Chromax Balls distinguish themselves from their all-white counterparts offering multiple advantages to players including sharply reduced ball loss, reduced search time, and easier to see ball flight that helps golfers correct their swings. In addition, the Chromax balls are beautiful to look at, adding character to tradition. The lower compression Chromax ball is designed for optimum performance at lower swing speeds. All Chromax balls conform to USGA regulations and are legal for tournament play.

These set of golf balls received a rating of 4.5 out 5 stars. What I really liked about this product is that not only are the balls colored, but it also reflects from the sunlight which makes them easy to spot by coming out of its hiding spot. The customers who enjoyed this stated, “I think they stand out even better than a regular golf ball (even the silver one is distinctive from a distance b/c it has a sheen to it).” This is to say that if you hit your ball and it lands in tall grass. You’ll very likely to spot it no matter what color it may be. As long as you’re playing golf on a sunny day, it would be impossible to not know where you’re ball is located.

Chromax has been around since 2007 from  the annual PGA Golf show in Orlando. The company has a love tradition of the sport called golf but wanted to try something a little different by spicing things up. Not only do they love colored golf balls, but they also wanted something that would really enhance the game of golf. What they came up with were golf balls called Chromax. These Chromax golf balls have a metallic layer that reflects sunlight like a mirror and its elegant colors add a little character to them as well which makes each ball easy to see and beautiful to look at. This is what the company was after. The company also made sure that it’s USGA tournament legal because they don’t want to change the game. They just want to make it a little more fun by adding some “shine” to the game.

Now that I’ve gone over what this product is all about, it’s now your turn to offer any comments, feedback, questions that you may in the comments section below. I hope that you enjoyed this review, and please share this if you did. I look forward to hearing what you have to say. Thanks!