Here’s a playing set that you can play in either the garage, backyard (provided you have a lot of space), driveway or on the street. It’s called the Deluxe Folding Hockey 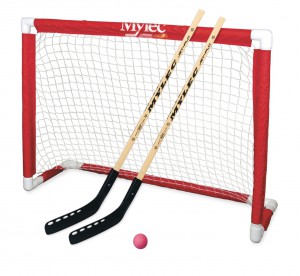 Goal Set by Mylec. This goal set is, as the title says, foldable so you can put in a safe place in your garage, shed, or basement for easy storage without taking up too much space as compared to a non-foldable hockey set.

If you enjoy playing hockey, or if you know anyone that does and either you or they:

Then, this item would be suitable for you or someone you know, and it will provide hours of fun and enjoyment.

This hockey set without the ice was a pretty revolutionary shot attempt, and some might even say it was a crazy idea over 40 years ago, but nevertheless a man named Raymond W. Leclerc pressed on. With 20 years of toy manufacturing experience and a lifetime love of all-things hockey, this proud creator developed the street hockey concept that’s so incredibly popular today. In 1970, he launched the Mylec Corporation and became a pioneer.

This youth street hockey set has a review of 4.6 out of 5 stars from 329 customers who bought this item. Most of the the reviews stated that it “didn’t take long to set-up/install”. Other reviews stated that it was just as much fun as compared to playing on the ice, only that the product is “not as expensive”.

Mylec Sports which was founded by Raymond W. Leclerc in 1970 offers a wide range of products for both street hockey and roller hockey, as well as other sports and flooring products consumers love. The company tries to make the best hockey equipment possible where people of all ages can enjoy the game without the traditional use of ice. Their mission statement is:

Mylec Hockey has been a leading innovator and manufacturer of street hockey equipment since 1970 when it was founded in Winchendon, Massachusetts. In 1972 Ray Leclerc developed the first Orange “no bounce” street hockey ball, that allowed the game to be played on all surfaces and is still the standard today for street hockey. Since then, we have been committed to setting the pace for the future, as well as offering the best price/value relationship to all of our customers.

I hope I provided you with as much information with this review about this hockey set for youths. In the future, I hope to add a hockey set that you can play on ice. If you have any questions regarding this post/article please add them in the comments section and I’ll answer right back as soon as I can. Thanks.