Do you need instructions in knowing how to play the game of shuffleboard, whether it’s in a bar or otherwise? Well,

look no further as I am going to go over how to play the Knockoff version of this game. I, for one am going to educate myself as well by going over the rules in this post since I have not played this game as much as I wanted to. These rules can be applied whether you are playing on a 9-ft, 12-ft, 14-ft, 16-ft, 18-ft, 20-ft, or 22-ft sized tables.

Before I get into the rules, I would like to first mention that the object of the game is to knock your opponent’s puck off the table where it falls to the side (not hitting the floor) or by sliding your pucks past his where it is closest to the other end of the table where it doesn’t fall off. To win the game, the person who gets to 15 points first wins. Now, on to the rules. 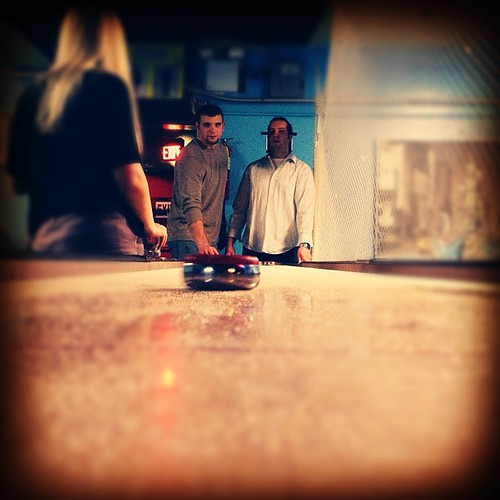 Before the start of the game, there would be a coin toss to determine who will shoot his puck first. The game can be played by four people where there are two players on one end of the table who are competing against another set of two people at the opposite end of the table. The team who wins the coin toss has the option of selecting a particular weight called the “puck” that is composed of “color” (red puck) or “hammer” (blue puck). The hammer puck is the heavier of the two and is the most advantageous one as well. And, once the color and hammer pucks have been decided by both teams the game begins.

The team that’s shooting color shoots first and whoever scores 15 points first wins the game. Players will continue to take turns shooting until all pucks are used. At this time, points are counted and the game play continues from the opposite end. The team which scored points on the previous round must shoot first on the next round. If all pucks are knocked off on the preceding round (in which case, no points were scored) than the rules of the hammer changes. In other words, the team that decided to get the hammer after the coin toss during the round where no points were scored must shoot first at the start of the next round. Play continues in this manner until one team reaches 15 points first. 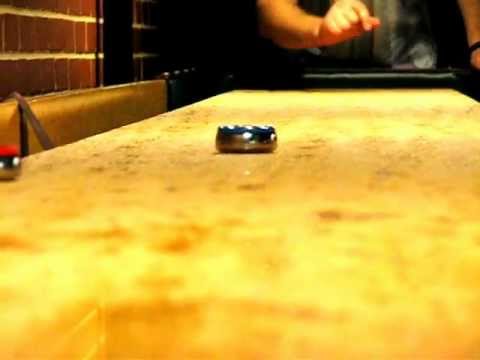 Before a player shoots, he can dust the board if dry spots are showing if he so pleases. Some players can do this to have an even playing field. An interesting thing to note is that in tournaments, this may be restricted to the edge of the board. Shooters must have one foot behind the playing surface while they are shooting. And, hitting, shaking, or moving the the table about in any way is prohibited and never allowed.

I have went over the rules of how to play the Knockout version of shuffleboard. I have included a video that you can see how this game is played below. In a future post, I am going to go over other shuffleboard rules such as Horse Collar and Crazy Eight. If you are interested in a shuffleboard table, I have went over one in my previous post that you can check out. If you have any questions/comments/feedback regarding these rules of this version of shuffleboard, please feel free to add them to the comments section, and I’ll reply back as soon as I can. Thanks!