Suppose you’re playing a game of stripes vs. solids. It’s your turn and you’ve pocketed all the stripe balls, and you are now aiming to pocket 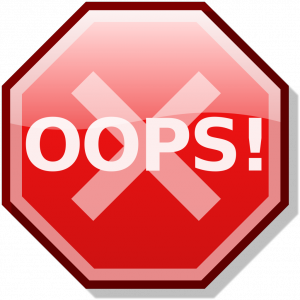 the 8-ball. Your opponent is trailing you by having three solids including the 8-ball for a total of four balls that he needs to pocket in order to win. You realize that you’re somewhat comfortably ahead. At the same time, you’re thinking to yourself, “I’m going to win this!”

You position yourself to hit the cue ball and realize it’s quite out of reach. You then aim and you hit. The cue ball makes contact with the 8-ball as it rolls and is about to go in the corner pocket. However, it does not. Instead, it hits the edge and it remains on the table.

You find yourself shaking your head in disbelief only to realize that it’s now your opponent’s turn. Two of his three solid balls are close to the corner pockets at opposite ends of the table, and the other solid ball is somewhat close to a side pocket. He shoots, aims, and pockets one of his solid balls in a corner pocket. You’re thinking to yourself, “I’m still ahead. I should be able to win this.” Your opponent shoots and aims for another solid ball to go in the opposite corner pocket, and that ball goes in. You are now slightly ahead by just one ball. The opponent, once again, hits and pockets his last and final solid ball in a side pocket.

At this point, you’ve realized that the tide has turned, and you no longer think you’re going to win. He aims, hits, and pockets the 8-ball into that dedicated corner pocket that you were supposed to have done earlier. The cue ball is the only ball left on the table where it’s standing still…game over.

What just happened here? You were on the verge of winning, and all of a sudden the game has ended without you winning the game. Well, a situation like that has happened to me many times in the past. At one point, if memory serves me right, I must’ve been ahead, at most, by five balls. All I had to do was hit the 8-ball in a pocket, any pocket. I’m going to delve into what my faults were in order for you to not have to go through that situation. Or, limit the number of times that will happen.

Mistake #1: Not planning ahead

One of the things I didn’t do that lead to losing the game like that was not thinking ahead of time, or plan ahead. My billiards opponent and I were both amateurs. He was trailing me, and I thought that there’s no way I can lose. But it does happen: so many times, in fact, to me. I just didn’t take the time to aim, posture my body, or level the cue stick. By not planning ahead, I was setting myself up for disaster, or in this case, to lose.

So, to prevent this from happening, one of my common advises is to plan ahead. Your billiards opponent, no matter if he’s a professional or not, can catch fire at any time.

Another mistake that I made was lacking focus. This ties in with my first mistake of not planning ahead. My mind was locked on only pocketing the 8-ball that I didn’t think what would happen if it does not. Yes, the object of playing the game of pool or any game regarding competition is to win. But, it’s also good idea to find a way where you can still win should anything unfavorable were to happen. Like, hitting the cue ball and it goes in a pocket, unexpectedly.

One way to have an effective strategy is try to visualize where the cue ball, or any other ball is going to be on the table once you’ve made contact with the cue stick. Another technique is to know how to control how hard or soft you should strike the cue ball.

Mistake #3: No bridge use

By saying that I was not using a bridge, I don’t mean taking an overpass to cross over a river. The type of bridge I am

referring to was in a form of a billiards bridge. I was using my hand and had to stoop and to aim for the cue ball that is out of my reach. Now, had I used a bridge as you see on the picture to the right, I would have had a better chance of pocketing that 8-ball.

At that moment where I was going to pocket the 8-ball, I didn’t think I was going to need it. However, I went against my better judgment and decided to go without using the bridge. My opponent didn’t have to use the bridge as the cue ball was not out of reach during that game.

Mistake #4: Playing not to lose

The mindset of a professional sports player is most likely to play to win as I’ve mentioned earlier in talking about my second mistake. The way I see it, it’s that and playing not to lose. My mindset was set on only playing to win. In this example, I was so focused on pocketing that darn 8-ball so I can win a game of billiards only to find out that it didn’t fall into a dedicated pocket. Little did I know, that I was going to have to watch my opponent win and have the last laugh. Well, he didn’t laugh. We just shook hands, and he said, “Good game.”

What I should’ve done was to hit the 8-ball, and try to make it “unsinkable” for my opponent should that ball not fall in the pocket. That way, my chances of winning would be better. Not only should I make the 8-ball unsinkable, but if I know that I wouldn’t be able to pocket any dedicated ball (in this case, stripes), I would try and apply this strategy to make my opponent not be able to hit at least one of his solid balls that has a high probability to go in a pocket. An example would be to try and hit a stripe ball that I know won’t be pocketed, and at the same time try to make the cue ball (unpocketed, hopefully) where I can try to give my opponent have some difficulty hitting one of his solid balls in a pocket. Like, I’ll try to make the cue ball as far away from one of his solid balls to hit.

No matter what lead you may have against your opponent, make sure that you take nothing for granted as losing is very possible and can happen. Yes, the game of pool is fun, challenging, and can be very competitive at times. You might find yourself taking the game seriously where there might be a bet on the side where money is at stake (no pun intended). If you can avoid these basic mistakes, then you have a better chance of winning a game of pool where you avoid thinking of “woulda, coulda, shoulda…”.

So, what are your experiences of mistakes in shooting pool? Please add them in the comments section, and I would like to hear about them.