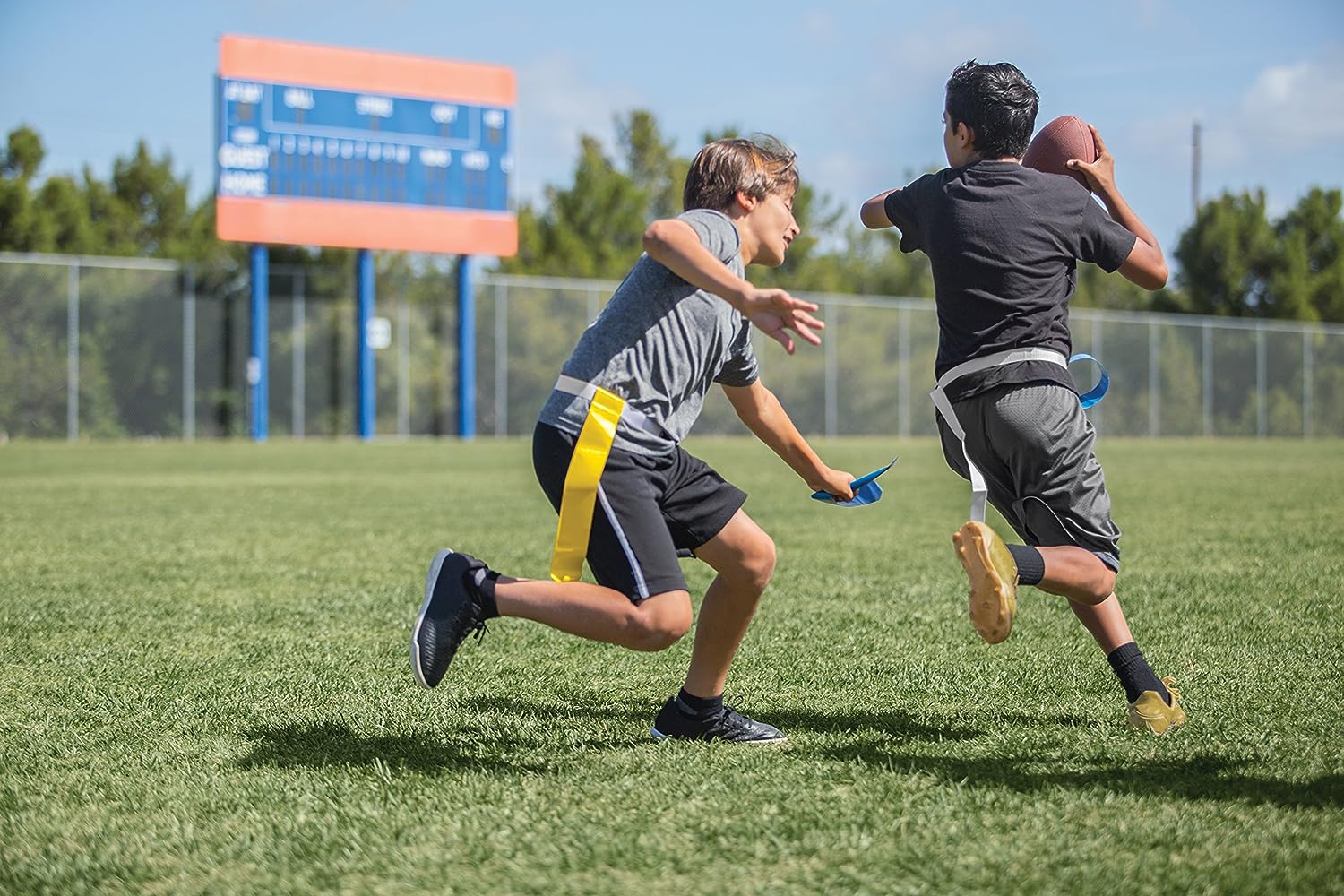 this form of activity quite fondly because I was mostly playing the hiker (center) position where I was the player that kept “snapping” the ball to the quarterback where he makes plays and throws the balls to other offensive linemen that’s on my team. I never really never played the gridiron type of football in high school which is the most common version that’s played in the NFL. If I was, I would very likely play the center position, because I that’s the only position that I was good at playing.

My other highlight of playing this game was when I was playing defense where I caught an interception. This only happened once, however. If memory serves me right, we didn’t score after I caught the ball, but we were very much in field goal range. There were no field goal posts when the game was going on. So, kicking a field goal was not an option. From where I caught the ball we went four downs, but had to turn the ball over to the other team for not scoring. I haven’t played flag football in over 20 years, and I just thought I’d share this.

What I’m going to do for the rest of this post is introduce you to a flag football set called SKLZ 10 Man Flag Football Deluxe Set by SKLZ. This set can be played with 5 men on offense and 5 men on defense. Instead of tackling on opposing player, you simply pull one of the football flags that’s shaped like a long ribbon from the belts that’s attached to the opposing player’s waist belt who’s holding the ball as shown in the picture to the right. The flags are attached to the belt using velcro where one team would wear the blue flags, another team would wear the yellow ones.

About the flag football set

This flag football set comprises of these features: 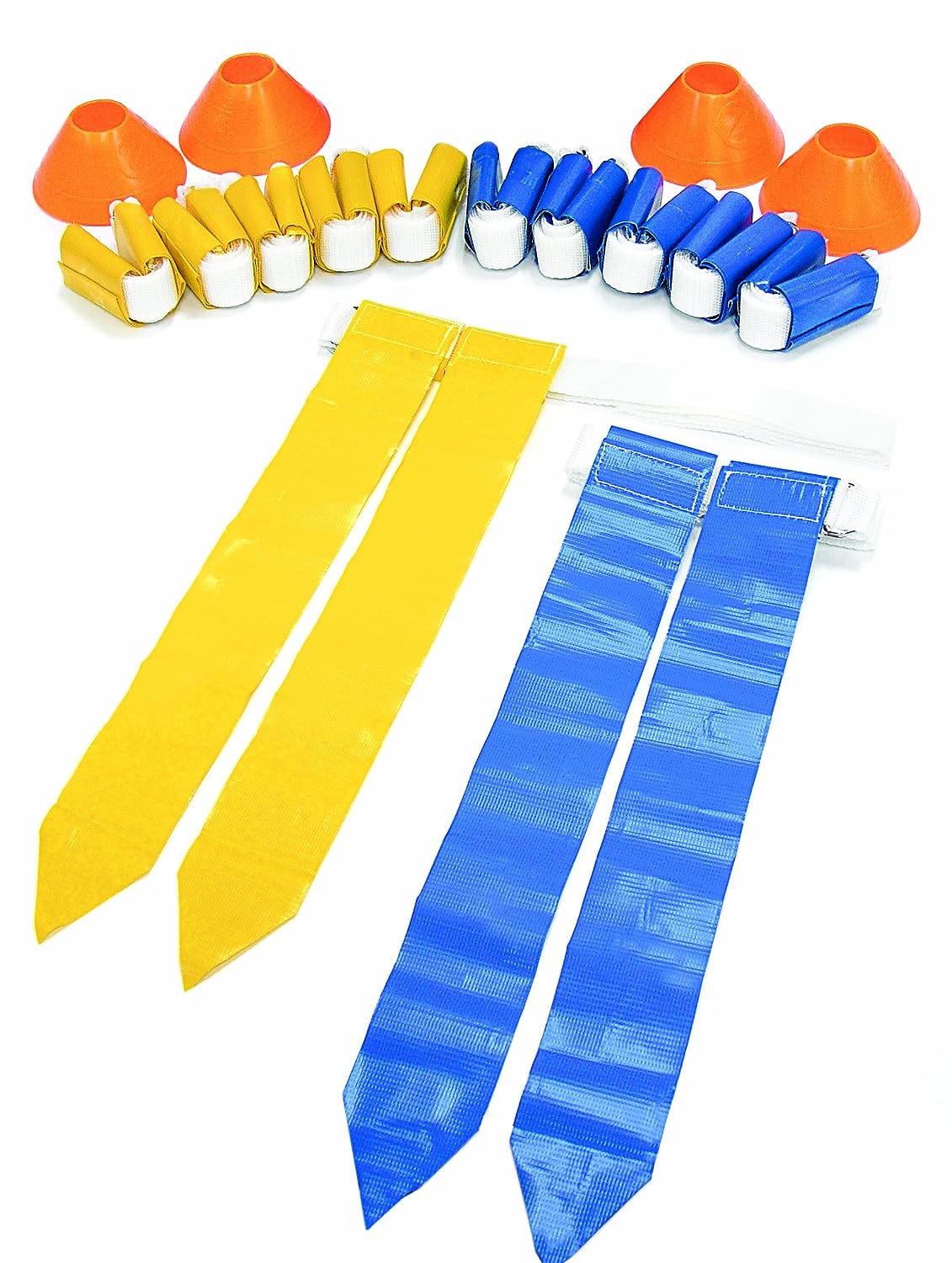 The SKLZ 10-Man Flag Football New Deluxe Set is perfect for a pick-up game of flag football in the backyard, at the beach or an official game on the turf. The complete flag football set has all the gear you need including belt, flags, cones and flag football rules. Includes ten strong nylon webbed flag football belts with D-ring closure; one size fits most, two Velcro flags per belt. Also include four goal line cones, flag football rules, and a nylon mesh bag for easy transportation. Recommended for ages seven and older. 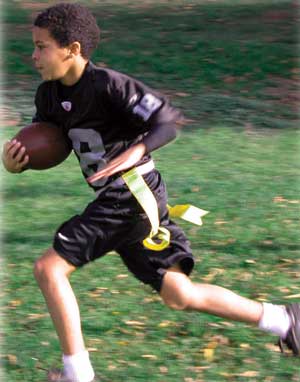 This product has received a rating of 4.6 stars out of 5 from the mostly satisfied customers who purchased this item. I have not used this item before, but since it’s coming out of 249 customers, I feel that the rating is enough to convince me to promote this item on this site.

One reviewer stated, “Purchased for my son to use with his friends. Has gotten a lot of use and really held up.”

Another reviewer stated, “These are a good deal, I’m happy with them and would get more if I need them.

I would recommend this set based on product durability and the reviews. The only drawbacks that I found is that the items in the set might come in smaller sets. For instance, the cones that come with the product can be “very small” as several reviewers stated. What happened was that he/she purchased larger cones to use a ball marker on the field.

Another drawback could be that the belts might not be as long. I know that there are people of all shapes and sizes. The belts measure at 34″ and as stated earlier, one belt fits most.

SKLZ is committed to elevating the athlete in each of us by guiding and serving athletes on their journeys to be their personal best. As the flagship brand of Pro Performance Sports, based in San Diego California, SKLZ develops innovative athletic performance and skill development training products, technology and knowledge for serious athletes of all ages, skill levels and sports including baseball, football, soccer, golf, softball and basketball. SKLZ is known around the world for delivering durable, high-performance training products used by professional and amateur athletes as well as their coaches and trainers seeking to improve on a sport-specific skill or a performance-focused goal such as speed, agility, balance or core strength.

I hope I have provided enough information about this flag football set. In the next post I’ll provide the best possible football to use with this game set. Please share this post on social media. As always, if you have any comments or questions, feel free to post them in the comments section below, and I’ll respond back as soon as I can. Thanks for stopping by!