I have finally decided to “side-step” away from anything relating to billiards. This 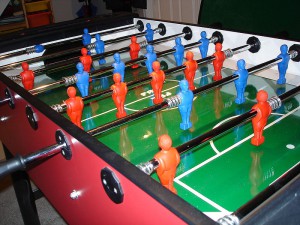 time around, I am going to try and go over another fun game that I have played in the past like ping-pong, air-hockey and darts. For this post, I am going to go over a commercial type of foosball.

This foosball table would make a good addition to your game room as you can play against an opponent or play a game of 2-on-2 where you have a partner while your opponent has a partner as well to win the game.

A little history of Foosball

The game of foosball which is also known as table football, table soccer (“Tischfußball” in German), fussball, baby-foot, and kicker was invented in the United Kingdom and patented by Harold Searles Thornton in the early 1920s. The idea came from a box of matches. With that box of matches he would lay out the matches across the box. At this point, it had paved the way of what the basis of the game would be.

In 2002, the game of foosball became an official Olympic sport by the International Olympic Committee (IOC) and General Association of International Sport Federation (GAISF).

Here’s a foosball table that I am going to promote here on this post and this site. This foosball table is made by a company called Tornado Elite where you can play in your game room. It has dual ball returns, heavy gauge rods, and split bearings for easy maintenance and professional play quality.

Here are other factors of description:

The Tornado Elite Foosball Table below, has a rating of 4.4 stars out of five according to 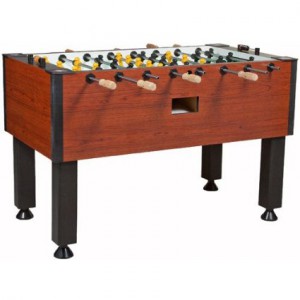 seven reviewers who bought the item. Because of this rating and for commercial foosball purposes, I am going to promote this product on this post.

The downside to this product are, according to the reviewers, are having to put the “stick men” on the poles. It takes a while to get them on, and they recommended that to apply silicone so it would glide in a little easier. Also, make sure that the men are “facing the right way” the first time. Otherwise, it might take another hour or two to fix that.

The product is quite steep at $1,849.00. However, you do get your money’s worth and it’s made from the highest standards of quality and durability.

The Tornado company’s warehouse is located in Madison, North Carolina where it has a reputation of providing the best quality foosball tables and equipment. In their website, they state that they are “the gold standard for foosball tables”.

Well, based on the seven reviews on the reviews above, I would have to say that I would buy into that statement. The Tornado company not only specializes in foosball tables, but also parts and tournaments.

I feel that you cannot go wrong with this foosball table. I want to know what your thoughts are about this post. Do you like playing foosball, and would you like to get a game of one-on-one sometime? If so, please add them in the comments section, and I would reply back within a 24-hour time period.

Previous Post: Is the Game of Billiards a Sport?
Next Post: The Difference Between Billiards and Pool