What activities or games do you consider a “sport”? Can it be an activity that constantly 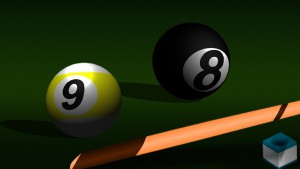 involves running and jumping where you’re almost always guaranteed to break a sweat? Or, can it be something less strenuous that doesn’t involve getting too physical, like video games, shooting marbles or playing a game of Texas Hold ’em poker?

One reason why I believe that the game of billiards is a sport is that it involves competition. I feel that any activity that involves a person or persons competing against one another person or group of people is a sport. Whether you are playing a game for a prize or a financial gain, competition can be considered “intense” which can lead to the game having a suspenseful aspect to it as well.

The competition factor in billiards might not be as intense or suspenseful as compared to a sport like basketball. But, I think that there is an element of competition as it involves two or more people playing against one another. Unless a player is playing solo to maybe practice making trick shots, then I would say that billiards is not a sport but just a session to just practice. It’s when two or more people are involved that are trying to win is when I consider billiards a sport.

Players do what it takes to win the game even when it comes to bending the rules. How many of you watch WWE Wrestling? For those of you that are familiar with that “sport” (even though it’s not real), the wrestling actors are known to use objects such as chairs and tables to beat their opponents behind the referee’s back to gain an upper hand. This results in the opponent being “knocked-out” that leads to winning the match. This, by the way, is also a form of hustling.

It’s not that players cheat in billiards to win (well some do when money is involved, but it’s quite rare). It’s that hustling in billiards, when performed by professional players, is not only an art, but a sport.

Well, the game of billiards is no exception. In the game of stripes vs. solids, a player needs to be able to pocket all his dedicated balls to win the game. Thus, he would also use a strategy to find ways where he would try to make the game as difficult as he can for his opponent. One way of doing this is by placing an obstacle (i. e. using his ball) to block and prevent his opponent from pocketing any balls as much as possible.

I know that there are many professional players that have the look of being focused like Jeanette Lee (pictured below) when trying to pocket a dedicated ball to fall in the hole. This is another reason why I believe that the game of billiards is a sport. This ties in with coordination. The only difference between coordination and focusing is that focusing doesn’t involve too much moving, but more concentration. 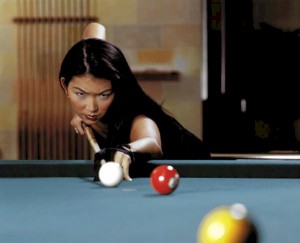 To your billiards enjoyment as a sport or otherwise,