Are you new to the game of cornhole? Or, are you interested in learning how to play the game. Well, for this post, I 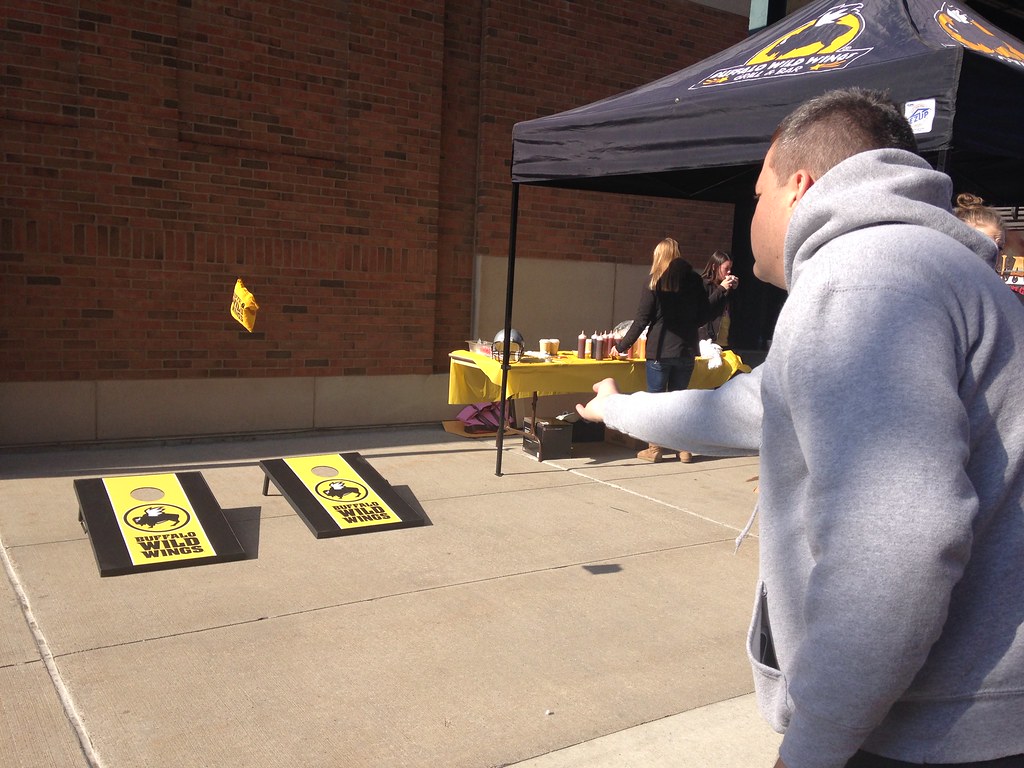 am going to go and try to explain how the game of bean bags/cornhole is played. You can also consider using these rules when playing on a cornhole set like this one.

First off, let me explain the description of this game. Wikipedia describes Cornhole as dummy boards, bean bag toss, dadhole, doghouse, Baggo or Bags. It is a lawn game played in America in which players take turns throwing bags of corn/bean bags at a raised platform with a hole in the far end that’s similar to the picture to the right. A successful bag throw in the hole scores 3 points. If a thrown bag lands on the platform, it scores 1 point. Whoever scores 21 points first wins the game.

The first thing you’ll want to do before playing the game is to locate a flat surface to play on. These surfaces can range from a parking lot, tennis courts, etc. Make sure that there’s enough room to play. Next thing you’ll need to do is set up your boards directly facing each other with 27 feet between the front edge of each board. Cornhole can be played between 2 and 4 players. Pick which side of the board you’re going to throw from. In a 4-player game, your partner’s pitching area will be directly across from you. If you start throwing from the left side of the board while playing a 2-player game, you’ll walk directly across to the other board, and throw back from the right side. The last set in the game set up is to pick your bags ( there will be a total of 4 bags for each team) to be ready for game play.

To decide who goes first (this is done by a flip of a coin or rocks/papers/scissors). Once this has taken place, take turns throwing bags with your opponent. Let’s assume that you first start, you throw one bag, then your opponent, then you, then your opponent, etc. Your feet may not go past the front edge of the board. If they do, a foul is called. Also, a tossed bag may not touch the ground. If it hits the ground and bounces up on the board, it is considered “out-of-play” and must be removed before any other bags are thrown. If it’s hanging off the board and touching the ground, remove that as well, that too is considered “out-of-play” and must must be removed as well. When all 8 bags have been tossed to the other side, you’ll then add up the scores. If your opponents earned the most points in that single round, your team will throw second in the next round.

Scoring is quite simple to learn in playing cornhole. It is done once all bags have been thrown, any bag that’s on the board will be worth 1 point. A bag that went in the hole is worth 3 points. Add up how many points you earned and compare them to your opponent’s points. Equal points cancel each other out so that only one team can score per round. For example, if you scored 3 points and your opponent scored 5, your opponent will add 2 points to their overall score and your opponent will throw first in the next round. If you scored 6 points and your opponent scored 6 as well, there will be no points awarded and whoever threw first in the last round will throw first again. A game is won when a team reaches 21 points with a lead of 2 or more points. The first team to win 2 games wins the match.

You can, however, play by your own rules. For example, some play with the rule that you must reach 21 exactly. If you go over in points, your score is automatically reduced to 11 and play continues. Another variation is to count every point (no negation of equal points) and see who has the most points at the end of 13 rounds.

I hope you have gained an insight to how the game of cornhole is played. If you enjoyed this post, please share on social media. Also, if you have any questions or comments, go ahead and send them in the comments section below, and I’ll be sure to get back to you as soon as I can. I have also included a video below to for you to hopefully get a better understanding to how cornhole is played.  Thanks for stopping by!