In the previous post, I have talked about a tutorial in how to play the game of foosball. 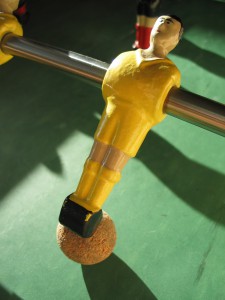 I have also, briefly, talked about a shot called the “snake shot” which is a technique in how to have one of your men on a rod kick the ball to go through the goal.

For this post, I am going to go over that snake shot as well as the best of various foosball shots that you can use to your advantage and maximize your winnings. I am sure that you are going to learn from these techniques, and hopefully I can turn you into playing the game of foosball a lot better.

This article will go over these types of shot techniques: snake, bank, tic-tac, and foos. There are several more shots which I am going to go over in a future post.

In the past post, I went over this form of trick shot which requires the movement of your wrist to glide over through your wrist to go upwards or downwards. Well, I am going to go over this shot in more depth. The main man on the rod that’s used for the snake shot is the one in the middle as he has the most advantage to kick the ball through the goal. Also, he would have the most leverage because the opposition goalie would have a more difficult time in deciding to block to the left or the right of the goal. I have added a video below where you can see how this move is performed in greater detail.

This is pretty much self-explanatory. However, rather than say to use one of your men to kick the ball to bounce off the wall and into the goal, I am going to try to go into detail in how this shot is performed. One thing to note about this move is that it is best used from the defensive side as it is more unpredictable and has a higher percentage as compared to the offensive side as it is more predictable where the goalie is likely to block the shot.

This shot is one of the more easier moves to master by novices. To execute this bank shot effectively, it is best to not move the rods when the ball is moving close to you. You would want the men on the rods to be in a “set-up” position from the start. For example, if the ball is coming from the left side of the table layout, you would want your men to be on the left side of that layout to set up the bank shot. Since the ball can come from any direction of the table, it’s probably best not to consistently pull or push the defensive rod in front of the goalie too often. Have them set to the left or right of the table depending on the frequency of what side of the table the ball keeps coming from.

Now, to actually use your men (except the man in the center part of the rod) to hit the ball, simply use your open hand to glide and move the handle upwards as shown in the snake shot video demo above or downwards (upwards is easier and best). Try to aim your men to kick the ball at a 45 degree angle. With practice, the move becomes easier to execute.

The kind of shot used in foosball is a form of tapping the ball between two men on the same rod. The ball is being kicked back and forth to form a tapping sound between the men to try and “trick” the opposition goalie that the ball is going to be kicked. This type of shot can also be used as a “mind game” where the goalie can be found second guessing himself where he might find himself hesitating if he should go left or right. Once this happens, it might be too late as the ball has been kicked and the ball has already went through the goal.

To execute the tic-tac shot, you must master how to pass the ball movement between the two men. The ball can move awkwardly if the ball is not passed correctly. Once you find an open shot to the goal, try to immediately kick the ball using one of the middle men through it after doing certain amounts of passing.

A foos shot (also known as a “stuff” shot) is a shot where your opponent kicks a ball on your side where you block the ball and try to kick it back in their goal. This move resembles a move in volleyball where a team that has a ball tries to spike it on the other side only to have it blocked and goes back to their side and it hits the ground.

I have went over the various shots that are played in foosball. There are more to be mentioned that I am going to go over in a future post, and I hope that I taught you how these moves are used. Please sound off in the comments section to what you have to say about the best of foosball shots, thanks.

To your foosball shots of enjoyment,