Needing a tutorial in how to play a game of foosball? Well, you’re in luck. The game 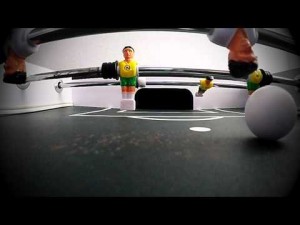 of foosball is quite a fascinating and fun game to play when you’re at home or out on the town with friends and family. It can also be a good activity to be become good friends and build relationships with acquaintances and colleagues where you can find a common interest by enjoying this fun game.

A foosball table is likely to be located wherever activities are found such as gaming halls, a friend’s house, or any places that have other activities such as pool tables, air-hockey, and darts.

For this article, I am going to give you a basic guide to learning how to play the game foosball.

Play on a right table

For this first step, you’re going to want to play on a table that’s leveled. The rods that the soccer men are attached to are not warped, and the playing surface and soccer balls are proportioned without any scratches or dents. This can lead to an uneven playing field where one player is being more advantageous over the other player. In addition, the table is considered being “biased” as he is scoring more often while the other is barely scoring or not scoring at all.

The soccer men that are attached to the rods would need to also be evenly proportioned. Like, if one man is not aligned evenly with the men on the same pole, then that specific man would need to be adjusted. This occurs from a lot of game play where players might try and manuever a “snake shot”. This kind of play is a form of trick shot is used by professional foosball players which I’ll go over in a future article.

It’s best to not hold the handles with your hand too tightly. By loosening your grip on the handles, you can have the soccer men move in 360-degree circles and switch and grab other handles more quickly. It also allows the scoring to be made easier when you use the men to kick the ball. The kicked ball will move much faster where your opponent will more than likely have a less reaction time to use his goalie to block the shot giving you a higher chance of scoring. This is a very effective technique and it’s highly recommended to use.

To move your men in 360-degree circles, use your wrist and let the handle glide (roll) on through the palm of your hands and let it slide through your fingertips where your hand moves upwards or downwards. It’s also important to not hold the handle as if it’s like a golf club or hockey stick as those holds require a more tighter grip and kicked balls would have a decreased speed. In addition, try to spin the rods in 360-degree circles one time where if you do it constantly where there’s no balls to be kicked can add wear and tear to the rods. Only spin the rods in this manner when one of the men on the rods has a clear path to kick the ball to the goal.

I know it’s common knowledge, but it’s best to learn the rules of the game of foosball. Like, know how much points are needed to win the game, where does the ball go at the start of the game, and who starts the first kick. These are only some of the rules.

Here are the most common:

While it’s nice to keep scoring, it’s also good know how to prevent the opposing player from scoring on your side of the goal. They say that, “The best offense is good defense.” While this statement is true in most sports, it also applies to all things that relates to gaming especially where there’s competition involved. Since the game of foosball is mainly played for fun, people might not consider using the defense tactic. However, if it’s played in a tournament where the winner gets a prize such as money, then it’s best to learn defense.

The basic defensive move is to tilt your defensive rods so the men are forming a v-shape with their feet where one man on one rod and one man from a neighbor rod are forming this. This a defensive tactic to prevent the opposite side from scoring. Make sure that the feet are not too far off the ground so the ball doesn’t roll through as a player can score through that non v-shape formation.

The purpose of this stance is to be able to move more freely by moving rods. As an added guide, you can go here for more of a description and pictures to this technique as well as other various techniques to guide you into more than just a basic way to play foosball.

I have given an overview of how to play a game of foosball. I hoped I gave you some enlightenment on the rules and what to do to play the game effectively while having fun at the same time. If you have any thoughts/questions/comments, please add them in the comments section, and I’ll respond to them as soon as possible. Thanks!

To your foosball enjoyment,