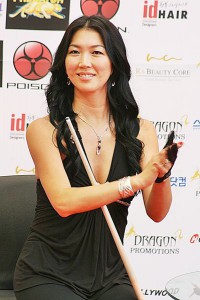 Here’s a player that I’m sure you’ve heard about in the professional billiards world, Jeanette Lee. She is known as being called “The Black Widow” among those closest to her because of how, in spite of her sweet demeanor, she would “eat people alive” when she got to a pool table.

I have seen Jeanette Lee play a handful of times on ESPN playing some 9-ball. And, all the times that I saw her she won. Now, I’m not trying to sound biased as I mentioned that I’ve seen her play only a FEW times.

In her Wikipedia page, it’s mentioned that she played a game of Nine-Ball against Efren Reyes where she lost 4-13. So, in my book she is considered one of the best professional billiards players.

So, have any of you seen Jeanette Lee play before? If so, tell me what you think about her in the comments section as I look forward to hearing your feedback. Thanks.