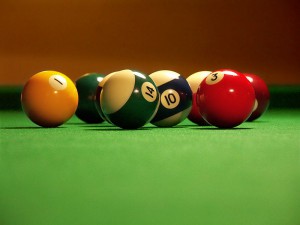 different ways of playing solids vs. stripes in pool. The style I played it was after someone breaks the rack, and both a stripe and a solid drop in the hole, then he would make a decision to either go for all the solid balls or all the stripe balls.

Also, it would still be his turn. If, however, two or more stripe balls fall and maybe one solid fall during the the break, then he would go for all the stripe balls.

The rules that I’ve heard are basically the same from how I’ve played it. However, the only significant difference is the placing of the cue-ball as it drops in a pocket. A few people that I know would place it anywhere on the table and shoot for his established colored balls.

Others would place it where the ball was set before the rack was broken, and shoot forward for one of his established balls from there. In what way did you play solids vs. stripes? Please add some comments as I would like to know.