Now, here’s a version of billiards that I just saw today (well not in person). I was trying to find 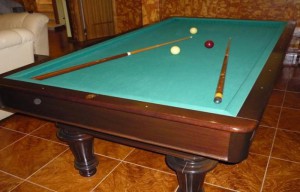 another type of game relating to billiards, and I found this.

It’s called Carom Billiards also known as “The Pocketless Pool” as the table has no holes on the table to sink any of the balls into.

Carom billiards is not considered pool as pool only consists of tables that has pockets in them. Examples of pool would be Traditional (which is the most common with six holes on the table), Snooker, and bumper pool.

Failing to strike three cushions or the second object ball results in the end of your inning.” Though I have never played this game, I have seen a YouTube video where the object is to score points instead of sinking the ball into pockets as in traditional pool.

I have added the video below where you can see how it’s played. So, if you have played this version of billiards or have any feedback please add them to the comments section. Thanks