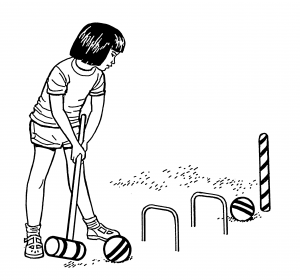 long ago from the time of posting this article. Since there are several forms of croquet that are available to play with, I am going to go over the rules and variations on how to play on some of these variations. I am hoping that after you’re done reading this post that you’ll have a good knowledge of how each variation is played and you’re satisfied and be having a lot of fun playing any variation too.

Each variation to playing the game of croquet can differ from country to country and can be different within a country as well. The game, regardless of variations, has been played and enjoyed by people for over 150 years and continues to be played to this day. Some of these are golf, gate, and association which I am going to go over in this article. 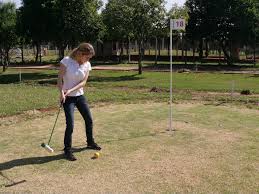 This variation of golf croquet consists of yellow and red balls that play against black and blue. If there are secondary colors being used, then white and pink would go against brown and green. The game can be played one-on-one or doubles (2 vs. 2). Only one ball will be used per doubles (ball vs. ball) should it be played that way.

Before the game there is going to be a coin toss where the winner of the toss plays and starts with the blue the ball. This is followed by the other player(s) or doubles in the game. By the second turn it is usual to find players trying to get right in front or even through the first hoop. As soon as a player or team makes that hoop, then all players contest the next player to make that first hoop. The game cannot be progressed until a ball is hit and goes through the first hoop, then the second, then the third, etc.

If a player/team is unable to make a hoop, and sees that an opponent might do so, then this player/team might be tempted to sneak towards the next hoop in order. There are penalties for doing this, and it is advised not to follow through and give in to this temptation.

Another variation of croquet is called gateball. This form of croquet was originated in a Japan by Suzuki Kazunobu in 1947 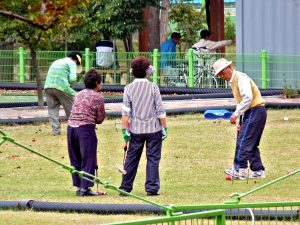 where it is played on a rectangular court that measures at 15 meters wide and 20 meters long. A typical court consists of a goal pole and 3 gates. The game is played by two teams that’s either white or red and consists of up to five players per team.

The two teams use five balls each, either red or white depending on the team, and play in an alternating fashion between red and white the balls numbered from 1 to 10. Each player plays the same ball throughout the game. At the beginning of the game the players, in order, place their ball in the designated “start area” where each player attempts to hit the ball through the first gate. If they successfully pass through the gate they may play again. On the other hand, if the player misses the first gate, or their ball passes through the first gate but ends up outside of the court, they can pick up their ball and have to try again in the second round.

One point is given for every gate the ball passes in order and receives two points for hitting the goal-pole. As with most games where scoring is involved the winner is the team with the most points at the end of thirty minutes. The red team always gets to play first while the white team always has the final turn, even if time has elapsed before the final white ball is called.

There is an advanced version of croquet called association where it’s played at an international level. This variaiton of croquet involves four balls that’steamed in pairs with both balls going through every hoop for one pair to win. What distinguishes this variation of croquet compared to the two mentioned above is the “croquet” shot: extra shots are allowed when certain balls hit other balls. The six hoops are arranged three at each end of the court, with a center peg.

In association croquet one side takes the blue and black balls while the other takes yellow and red. At each turn, players can choose to play with either of their balls for that turn. At the start of a turn, the player plays a stroke. If the player either hits the ball through the correct hoop (or runs the hoop), or hits another ball (called a “roquet”), the turn continues. Following a roquet, the player picks up his or her own ball and puts it down next to the ball that it hit. The next shot is played with the two balls touching. This is the “croquet stroke” from which the game gets its name. By varying the speed and angle at which the mallet hits the striker’s ball, a good player can control the final position of both balls: the horizontal angle determines how much the balls diverge in direction, while the vertical angle and the amount of follow-through determine the relative distance that the two balls travel.

After the stroke of the croquet, the player plays a continuation stroke. During this time, the player may again attempt to run a hoop or make a roquet. Each of the other three balls may be roqueted once in a turn before a hoop is run, after which they become available to be roqueted again. The winner of the game is the team who completes the set circuit of six hoops (and then back again the other way) with both balls where he then strikes the center peg. This makes a total of 13 points per ball.

Good players may make breaks of several hoops in a single turn. The best players may take a ball round a full circuit in one turn. Advanced play which is a variant of association play for expert players, gives penalties to a player who runs certain hoops in a turn. This allows the opponent a chance of getting back into the game. Games of skill such as triple peels, in which the partner ball (sometimes an opponent’s ball) is caused to run a number of hoops in a turn by the striker’s ball to help avoid these penalties.

A handicap system called bisques provides less experienced players a chance of winning against more advanced opponents. Players of all ages and both sexes can participate to play.

I know that this is a lot of information to absorb. I have provided ways to play these variations of croquet, and I hope that you are able to absorb most of the information provided. If you like, I can go into more variations of this kind of game. If so, please send a comment/reply/feedback to this post, and I’ll do my best to reciprocate and respond back in kind. Also please share this on social media. Thanks!

To your game(s) of croquet enjoyment,