In looking for topics and ways regarding the game of golf, I was looking on Amazon to find something that would be

a combination of both a tutorial with a common name attached to the sport. Well, I have just done that by finding a book called, Alice Cooper, Golf Monster: A Rock ‘n’ Roller’s Life and 12 Steps to Becoming a Golf Addict.

Before I get to what the book is about, I would first like to talk about the famous actor. Here are some facts about Alice Cooper.

The book, which is in paperback format (Kindle version also available), is about rock stardom, wretched excess, and golf: all 3 coming from the man who invented shock rock. You will learn 12 steps to becoming a golf addict from the rock star legend himself.

In this tell-all memoir, Alice Cooper speaks openly about his life and career, including all the years, which span 5 decades, of rock ‘n’ roll history he’s been a part of, the addictions he faced, and the surprising ways he found redemption.

A good portion of his childhood life was spent as a minister’s son where he was worshiping baseball and rock ‘n’ roll, to days on the road with his band working to make a name for themselves, to stardom and the insanity that came with it. This includes a quart-of-whisky-a-day habit, to dying out a sanitarium back in the late 1970s. Alice Cooper paints a rich and rocking portrait of his life and his battle against addiction. This addiction is coped by getting up every day at 7:00 am to play 36 holes of golf.

Alice tells hilarious, touching, and sometimes astounding stories about Led Zeppelin and the Doors, George Burns, John Daly, Groucho Marx, Tiger Woods, and everyone else including Arnold Palmer and Elvis.

Alice Cooper, Golf Monster is the incredible story of someone who rose through rock ‘n’ roll ranks releasing platinum albums and selling out arenas with his legendary act-all while becoming one of the best celebrity golfers around.

Here is a description of what this book entails: 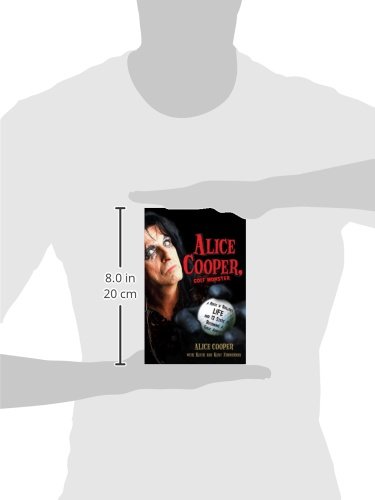 Out of 115 reviews, this book received a rating of 4.6 out of 5 stars. Alice Cooper pours his soul in fighting his addiction by playing the game of golf. One reviewer stated, “A man who has fought (and overcome) his addictions and personal demons.” This same reviewer went on to state, “During his time of being in the music scene, he has sold multi-platinum albums, toured the world, battled alcoholism and the rock star lifestyle in general, and become one of America’s most respected celebrity golfers. And now, Alice has released Alice Cooper, Golf Monster, which is a most enjoyable read.”

In addition to Alice Cooper, the co-authors are twin brothers Kent and Keith Zimmerman who have written 18 books together. Recent published works by the Zimmermens’ include Alice Cooper, Golf Monster with rock legend Alice Cooper for Crown/Random House as well as A Personal Stand, with Country Superstar Trace Adkins published by Villard/Random House.

The two brothers began their writing careers in the music industry, having spent over two decades as Senior Editors with the national music trade magazine formerly known as Gavin. In April of 2005, the Zimmermens were named 2005 Writer Laureates by the San Francisco Friends of the Library. In addition, the Zimmermens teach a weekly creative writing class in H-Unit at San Quentin State Prison.

I hope I have given enough information about this book to become a better golf player. If you have an interest in this post, please share this in social media. Also, if you have any questions, comments or feedback, please post them in the comments section, and I’ll respond back as soon as I can. Thanks!